There’s no way around it. People are overwhelmed with email. And with 205.6 billion emails sent per day — 112.5 billion of which are business related — “overwhelmed” is probably too polite a word.

As a result, getting your own emails opened, read, and responded to is harder than ever. In fact, of all the business related emails that get sent:

That’s according to Get Response’s 2016 study on The State of Email Marketing. However, it’s not all bad news. Despite such gloomy statistics, email remains the most effective and profitable digital communication channel … period. For every $1 businesses spend, email produces an average $38 return. And even more surprising,email is still 40 times more powerful at customer acquisition than Facebook and Twitter combined.

Why? Because as Pro Opinion stresses, “Unlike Tweets or Facebook posts, which are put up publicly, email is inherently personal — each person receives a message straight to his or her inbox.” Sadly, personal is exactly what missing from most business emails.

All this means one thing: The problem with email isn’t email… it’s how you and your business are using it.

Take this real example I received a couple of weeks ago: 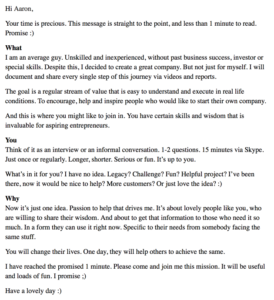 What makes it so terrible?

1.  It’s too long. Despite the one-minute promise (mentioned twice), I wasted ten times that getting through it.

2.  It’s too impersonal. While it’s written conversationally, there’s nothing in it particular to me and no concrete incentive to write back.

3. It’s too vague. Even after spending 10 minutes with this beast, I still have no idea what they’re asking me to do.

Thankfully, the science and data on creating the perfect email is in and it all comes down to using just five questions behind the scenes: who, what, why, when and how.